Global Animal Welfare Solutions Founder Glyn Roberts has over 22 years experience in veterinary nursing and Animal Welfare, 18 of them employed by the RSPCA.

With 14 years experience as an RSPCA Inspector stationed in both rural and inner city locations there are very few situations that Glyn has not encountered. From investigating badly run pet shops dealing in exotic and dangerous reptiles to co-ordinating the airborne rescue of TV celebrity Jonathan Dimbleby’s bull using a Royal Marines Helicopter no two days were ever the same.

As a Trainee RSPCA Inspector Glyn passed out second in his class and was awarded the RSPCA’s Antonia Parry Award for top equine student. During his career he was awarded the Chief Officer of Inspectorate’s Certificate of Merit for his management of a complex and long running investigation into a Stud farm with over 100 neglected ponies, which resulted in the prosecution and successful conviction of the owners. 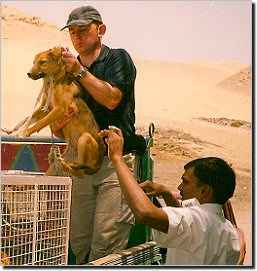 RSPCA Inspectors are highly trained in the complex world of animal welfare legislation and during his time with the Society Glyn became acknowledge as a tenacious and dedicated case officer who would pursue every possible avenue to bring the perpetrators of cruelty and neglect to Court.

Another part of his work revolved around rescuing animals that had found themselves in difficulty. As a member of a number of Rescue Teams within the Society, Glyn frequently found himself up to his waist in water or dangling off a rope over seemingly bottomless drops. As a result by the time he left the Society he had been awarded the RSPCA’s Disaster Medal for his part in the Sea Empress oil spill, 8 Certificates of Merit and 7 Certificates of commendation for numerous hazardous rescues.

Just one of the citations reads: “You are commended for your actions described above and I congratulate you on your tenacity and devotion to duty” – This in respect of the successful rescue of two terriers trapped underground and with rising flood water.

In 2005 after a period volunteering with the then Tsunami Animal Welfare Trust in Sri Lanka working with their mobile field hospital and dog catching teams Glyn began developing an interest in overseas animal welfare. Since then he has worked with a number of charities in Australia, Egypt and the Caribbean. In 2006 Glyn was one of the Trainers in a WSPA funded course at Sakkara in Egypt where delegates from animal welfare charities throughout Africa and India were taught different humane dog catching techniques.